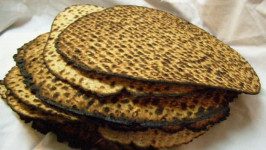 Pesach begins on the 15th day of the Jewish month of Nissan. It is the first of the three major festivals with both historical and agricultural significance (the other two are Shavu’ot and Sukkot). Agriculturally, it represents the beginning of the harvest season in Israel, but little attention is paid to this aspect of the holiday. The primary observances of Pesach are related to the Exodus from Egypt after generations of slavery. This story is told in Exodus, Ch. 1-15. Many of the Pesach observances are instituted in Chs. 12-15.

The name “Pesach” comes from the Hebrew root Pei-Samekh-Cheit , meaning to pass through, to pass over, to exempt or to spare. It refers to the fact that G-d “passed over” the houses of the Jews when he was slaying the firstborn of Egypt. In English, the holiday is known as Passover. “Pesach” is also the name of the sacrificial offering (a lamb) that was made in the Temple on this holiday. The holiday is also referred to as Chag he-Aviv , (the Spring Festival), Chag ha-Matzot , (the Festival of Matzahs), and Z’man Cheiruteinu , (the Time of Our Freedom).

Probably the most significant observance related to Pesach involves the removal of chametz from our homes. This commemorates the fact that the Jews leaving Egypt were in a hurry, and did not have time to let their bread rise. It is also a symbolic way of removing the “puffiness” (arrogance, pride) from our souls.

Chametz includes anything made from the five major grains (wheat, rye, barley, oats and spelt) that has not been completely cooked within 18 minutes after coming into contact with water. Orthodox Jews of Ashkenazic background also avoid rice, corn, peanuts, and legumes (beans) as if they were chametz. All of these items are commonly used to make bread, thus use of them was prohibited to avoid any confusion. Such additional items are referred to as “kitniyot.”

We may not eat chametz during Pesach; we may not even own it or derive benefit from it. We may not even feed it to our pets or cattle. All chametz, including utensils used to cook chametz, must either be disposed of or sold to a non-Jew (they can be repurchased after the holiday). Pets’ diets must be changed for the holiday, or the pets must be sold to a non-Jew (like the food and utensils, the pets can be repurchased after the holiday ends). You can sell your chametz online through Chabad-Lubavitch. I have noticed that many non-Jews and non-observant Jews mock this practice of selling chametz as an artificial technicality. I assure you that this sale is very real and legally binding, and would not be valid under Jewish law if it were not. From the gentile’s perspective, the purchase functions much like the buying and selling of futures on the stock market: even though he does not take physical possession of the goods, his temporary legal ownership of those goods is very real and potentially profitable.

The process of cleaning the home of all chametz in preparation for Pesach is an enormous task. To do it right, you must prepare for several weeks and spend several days scrubbing everything down, going over the edges of your stove and fridge with a toothpick and a Q-Tip, covering all surfaces that come in contact with food with foil or shelf-liner, etc., etc., etc. After the cleaning is completed, the morning before the seder, a formal search of the house for chametz is undertaken, and any remaining chametz is burned.

The grain product we eat during Pesach is called matzah. Matzah is unleavened bread, made simply from flour and water and cooked very quickly. This is the bread that the Jews made for their flight from Egypt. We have come up with many inventive ways to use matzah; it is available in a variety of textures for cooking: matzah flour (finely ground for cakes and cookies), matzah meal (coarsely ground, used as a bread crumb substitute), matzah farfel (little chunks, a noodle or bread cube substitute), and full-sized matzahs (about 10 inches square, a bread substitute).

Some people observe an additional strictness during Pesach known as gebrochts, from a Yiddish word meaning “broken,” although I’m not sure what brokenness has to do with this restriction. Those who observe gebrochts (or more accurately, “no gebrochts”) will avoid any matzah product that has come into contact with liquid after being baked. The rule arises from a concern that matzah may contain bits of flour that were not completely cooked and that would become leavened upon contact with liquid. People who observe this strictness cannot eat many common traditional Pesach dishes, such as matzah ball soup, and cannot even eat charoset on matzah at seder. They are careful not to spill seder wine on their matzah, and promptly remove the wine spilled as part of the seder. Observance of this additional restriction is not common, but many people become exposed to it because it is followed by the Chabad-Lubavitch, who are active in Jewish education. Some have criticized gebrochts for unnecessarily complicating Pesach and taking some of the joy out of this celebration of freedom for no good reason, noting that the premise of this rule contradicts codes of Jewish law that explicitly say it is impossible for matzah to become chametz once it is baked. Nevertheless, this effort to more fully observe G-d’s law is worthy of respect, even if you are not inclined to add this restriction to your own Pesach experience.

Fast of the Firstborn

The day before Pesach is the Fast of the Firstborn, a minor fast for all firstborn males, commemorating the fact that the firstborn Jewish males in Egypt were not killed during the final plague.

On the first night of Pesach (first two nights for traditional Jews outside Israel), we have a special family meal filled with ritual to remind us of the significance of the holiday. This meal is called a seder , from a Hebrew root word meaning “order,” because there is a specific set of information that must be discussed in a specific order. It is the same root from which we derive the word “siddur” , (prayer book). An overview of a traditional seder is included below.

From the Kof-K: Unauthorized Nori Sheets

Recently, possibly due to the shortage, there’s been several unauthorized Kof-K’s on Nori... more»

From the Kof-K: Randa Bakery – No Longer Certified

Please be advised that certification for Randa Bakery in Ronkonkoma, NY has been terminated... more»

From The Kof-K: Nori Sheets

Recently, possibly due to the current shortage, several unauthorized Kof-K’s have been... more»